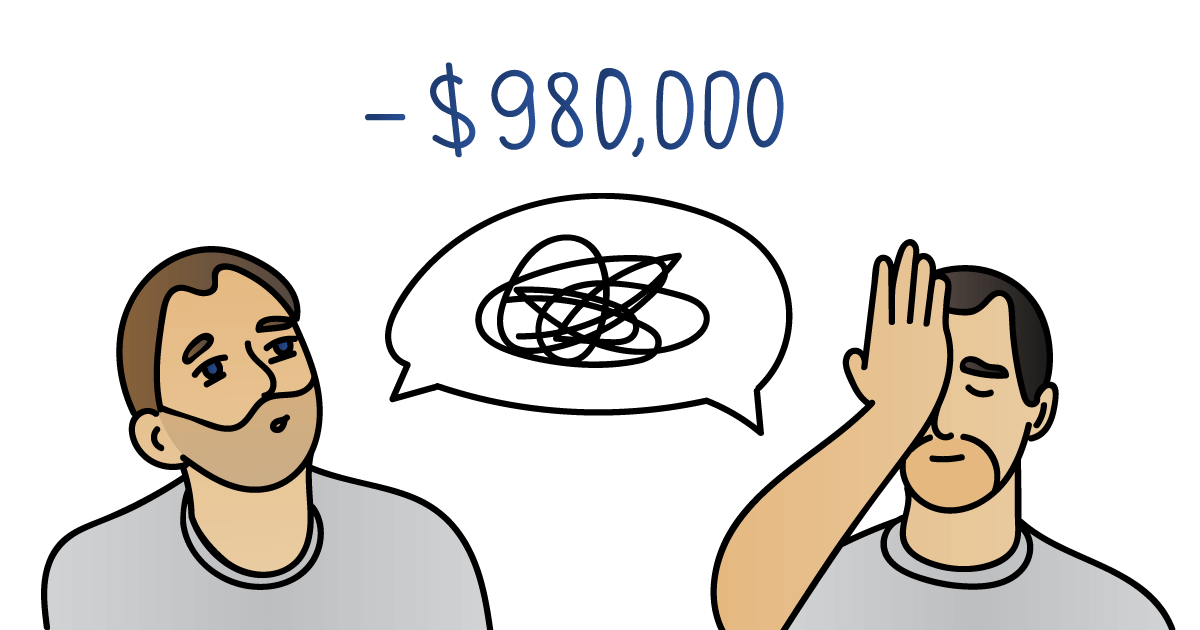 Three months after we closed the sale of WooCart (hosting for WooCommerce stores), our project that was gonna “make it big”, I am ready to review the full financial consequences of our failure:

It’s also been four years of company focus and four years of my life that went into the project. We more or less gave it everything, but it still failed.

This is a cautionary tale, and I hope you’re smarter than we were – because we read stories like this, and we still made the same mistakes. And yes, some mistakes are really, really obvious and really, really stupid. It’s funny how it never feels that way when you’re doing them.

How we got into this mess

The path to our first 7-figures was not easy. It took many failed ideas, a few solid projects, and about eight years of being in business.

After we got a taste of success, we soon started looking at projects in more competitive markets for an even larger one. We probably learned something in these past few years, right? We kinda know what we’re doing now (red flag). Actually, no, I think we’re going to crush it (red flag). We got this!

We might have been a bit arrogant. It didn’t help that my cofounder Nejc and I decided on the whole project in an afternoon (red flag), in a conversation that still haunts me to this day.

Someone mentioned to me that the first product is usually under-engineered and the second one is over-engineered. If only we were smart enough to learn from other people’s mistakes. Our first projects we always engineered at bare minimum, because we had to. There was no money to spend. We were bootstrapped and on tiny revenue.

This time though, we thought, we’ll build it “the right way” (red flag). We have the money to spend (red flag). We hired contractors to get to market faster (red flag), we wrote a “big features list” (red flag), designed our killer USP (WooCommerce sync between staging and production), and we planned web hosting domination – only 1% of the estimated market share could 3x our company (red flag). Yes, we knew even back then we shouldn’t do calculations like that.

We used completely new tech for this project on a big scale. Unsurprisingly, we figured out later that some of it was an even poorer choice for our use case than the tech we were replacing.

And yes, we know what MVP is. We also know about lean methodology. We just didn’t think it applied here. We’ll be crushing giants, and you can’t do that with an MVP. And don’t forget, we know what we’re doing.

Of course, only after a few years and some sober thinking have we figured out we could’ve easily just made the USP a product and maybe even solved the distribution by selling it to hosting providers. If we took more than an afternoon to discuss the idea, we might have figured that out when it counted.

So we started building. And did we build. For months and months. We launched something after two years or so. It was nowhere near ready for the mature WordPress hosting market, but we had to put it out there. We had already spent a ton of money by then with nothing to show for it but a growing list of features.

The first doubts started creeping in then already. But we haven’t even built the MVP yet, so we thought we can’t give up now (we should have). We got the “majority” of the project done and we let go of the contractors. It was our team only from now on.

On the customer side, we got great feedback from the start. The problem with that feedback was that it was because of support provided by me, as the founder and project lead, and my coworker as the lead developer (red flag). For us to be fixing issues that WordPress caused did get us goodwill by a specific customer, but that would not be scalable, nor does it actually make our product better. In other words, the initial enthusiastic feedback was for our support work, not the product or where it was going.

Our major USP, the staging-production sync, was also at the bottom of our features list. How it got there, nobody knows. Because we know you build the core value first.

So how did we get to almost a million dollars spent on a project? Similar to how you eat an elephant. Slowly, over months and years and with regular breaking of set milestones and limits, and lots of sunken cost fallacy. It didn’t help that there was always something just a few weeks or months away from really making a difference: a partnership, a blog post, a mailing, or an amazing feature. As entrepreneurs, we’re usually optimistic in our outlook and that pushed me further than I should have let it.

This more or less burned all our profit in the four years.

“Good enough” competitors were too big of a hurdle

We catastrophically underestimated how big of a challenge overcoming “good enough” is.

After three years of constant development, we actually had a really good product. Some knowledgeable industry people even said that this is how WooCommerce hosting was supposed to be. We had all the right features – for beginners, intermediates, and experts. We were far easier to use than most of our competitors and on par with the best ones, and we had a few unique and really useful features. Plus, we had what we thought was the big USP: staging and production sync of WooCommerce stores.

But the incumbents were hosting companies with hundreds or even thousands of employees, and their services were… good enough. Not great, but just good enough that it was really hard for us to convince customers to move their business and livelihood to our new service. In the end, our USP was a nice to have and not a killer feature we expected. Don’t get me wrong, there was a lot of research that confirmed that this was a problem people were looking for solutions, but it just wasn’t worth solving for enough of our potential customers.

On the marketing side, we tried almost everything: Facebook ads (a failure we spent money on for way too long), Google ads (to this day unknown why there was neither the search volume nor the conversions for such a large market), conference sponsorships, Facebook groups, one-on-one sales, cold-emailing. Nothing worked on a scale we required – and in most cases, it just did not work, period.

All of this resulted in revenue being slow. Really slow. It took us 16 months after launch to get to $5k MRR. In our succesful project, we started with $5k MRR. By the time we listed the project for sale, the revenue had reached $10k, but it did not cover salary expenses, and it was absolutely exhausting for the two of us left involved. We were dealing with people’s livelihoods, so there was no space for screwups. Support was done on weekends, evenings, before sleep, after waking up, and on holidays. Almost every day, for years.

It was only after a long talk with a business friend that I finally realized it was time to cut our losses.

Soon after, we listed WooCart on MicroAcquire and sold it a lot faster than expected. The new owners are a mid-sized hosting company, HostPapa (this post has been published with their blessing). We are confident in their tech ability and were happy to see that the project will live on and probably thrive under new owners. With their extensive selection of hosting products, they already have the crucial thing we failed to get – a regular stream of customers looking for hosting solutions.

Hindsight is 20/20, as the saying goes, but there are things we learned that we have internalized and have already put into our workflows.

We now use contractors only for mentoring. If we’re doing development and spending money on it, we want to do it with our team as the knowledge will stay in the company. If in the end the project fails, at least the investment was not for nothing as the team learned new skills.

We spend money on advertising only to the amount the project brought in revenue last month. This goes only for experiments and non-profitable advertising of course. If we ever find anything that we can put in $1 to get out $2, we’ll throw buckets of money into it.

We don’t jump into projects anymore. We’ve been discussing multiple new ideas this year, but we let them sit for weeks. I build the wireframes and write the basic idea analysis and publish it for everyone to comment on. We then revisit it every few months and see if the idea still makes sense and if we have any new insights.

We really think about what is the product’s core value and how to build the Minimum Viable Product. Keeping in mind “viable” depends a lot on the market we’re entering. If the market is mature, developing the MVP might still need a long time (and makes it a negative in the idea selection). Also, looking at it from different angles – can we do something simple at the beginning that validates the idea but does not necessarily fully solve the problem. We can always build on that when there are customers and if they see value in the first step.

Our latest project, Pareto Security, a macOS security app, is one that we built very lean. We launched the MVP in a month, we’re keeping to our budgets and we haven’t used external contractors.

Idea generation is a big problem. We’re like thousands of similar small software companies trying to compete in the same red ocean. Be it CRMs, marketing or ad tools, productivity, HR, management, developer tools,… There are probably five different ways every problem we encounter has already been solved and by 15 different companies. SaaS in these markets is really, really hard.

Nejc and I both knew for some time that going outside of these easily seen markets is the way forward. There are hundreds of industries that would benefit from software solutions, and there are probably thousands of people that have software ideas in these industries but have no idea how to build them.

It was only in the past few months that things really clicked. We got rid of the old projects, decided we wanted a partner for our next project, and found a source for finding great people with amazing ideas.

We’re now talking to people in construction, finance, transport, shipping, and many other industries. The calls have been eye-opening. People are validating some absolutely amazing ideas on side-project budgets with poorly built software that’s just begging for an experienced team to help it go big.

We have the infrastructure and experience to build amazing software and scale it – they have the idea and the market. It’s a perfect match.

I haven’t been this excited about new projects in quite some time. Most of these ideas solve real, hard problems for their customers, so they’re also a lot easier to sell. Way easier than a new angle on website analytics, CRM, or online project management.

If you’re a person in one of these industries, let us know about your idea, and let’s have a chat. We’d love to build a project with you.

Dejan is the Director of Opportunities at Niteo, making sure we never run out of things to do.