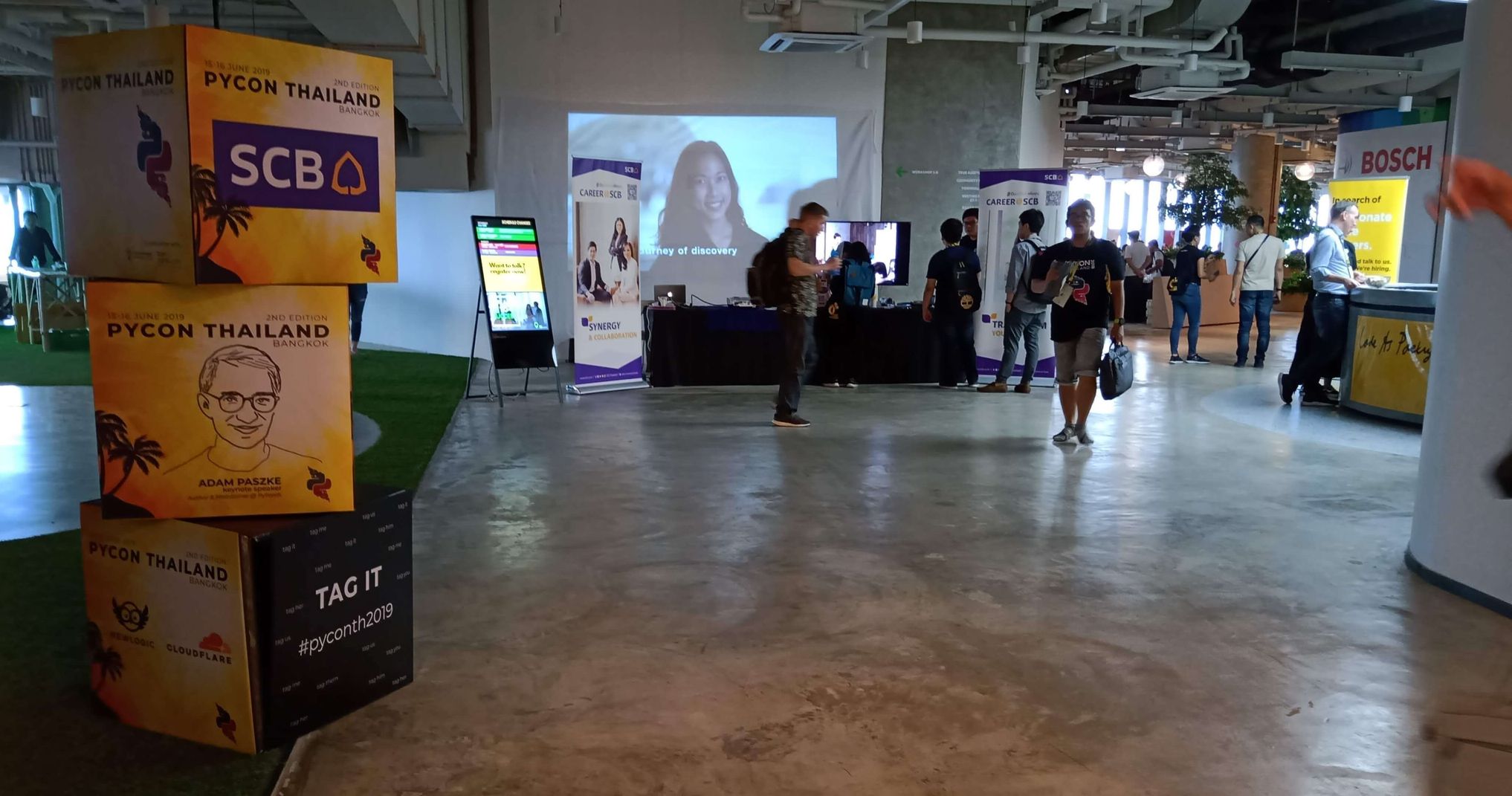 It is the first conference I ever attended, my first foreign trip, and the first opportunity to give a talk. In short, it was an incredible and unforgettable experience for me.

How to meaningfully contribute to Python without being very good at programming:

It was a talk to encourage people from both technical and non-technical background to start contributing to opensource. The key point that I think concludes the whole talk is:

Unique ways to Hack into a Python Web Service

An Indian security researcher discussed many ways to hack into a web service. Most of them are obvious, yet often ignored.

Just some introduction to conversation AI and Duolingo.

Automate the Boring Stuff with Slackbot

Demonstration of how easy it is to build a working slackbot.

The full talk was in Thai. But there were English subtitles in the slides.

Tech Skills: What’s Hot and What’s Not. How does Python stack-up against the rest?

The talk was about the current scenario of demand/availability of tech skills in different countries of Asia from an HR’s perspective.
A bunch of stats from StackOverflow.
All the points were very basic and I’m sure we all already have a pretty good idea about what’s hot and what’s not (given we are not riding the hype train).

Program Thinking – How do you design programs for diversity?

This talk was about how to bring more women into coding and how different initiatives are working on it. Specially #techladies.

This talk was about how Facebook release changes to production and the high demand for production Engineers.

Talks about PyTorch vs numpy

Python made my dream come true

A hackathon winner from India explains how his project won him a trip to Google headquarters and job offers from “dream” companies.
A good point he made was, if we want to get more attention, we should invest our time and efforts in one big, long term project instead of many small weekend projects.

Security Issues on your Python Code

This talk was a lot more informative as compared to other talks. The subject was to discuss different ways to bring Python to more devices (especially IoT). A good way to do it is to ship a compiled version of Python code instead of shipping the whole interpreter – probably using Web Assembly and how Beeware is working to make it possible.

Functional Programming in Python: Lessons from Haskell and Clojure

The talk was about how to use the goodies of functional programming in Python avoiding the common mistakes. The conclusion was, of course, Python is not internally built for functional programming, i.e. we have to compromise on things like speed and resource usage to use it as an FP language.

This was an introduction to Hypothesis: A library that can be used with our favorite testing libraries. It feeds random values to the tests and tries to break it. It knows which inputs are most effective to break a test case.

A resilient, scalable tracing and analysis system for micro-services – HayStack

Haystack product introduction. An opensource software to trace logs in microservices in a highly complex platform.

Any Code Formatter You Like – As Long As It’s Black

A talk by one of the authors/maintainers of Black.

Here I introduced one of my libraries: https://github.com/sayanarijit/expandvars

How Python Can Excel

Talk on how to bring more enthusiasm into the Python ecosystem, i.e. organizing local conferences, initiatives like tech ladies, or getting involved with the existing ones.

A quick quiz session was held. I won a cup and a foldable travel bag.

Thanks to the staff, organizers and volunteers for putting the incredible effort to organize such a successful event and Niteo for sponsoring my trip and encouraging me to give a talk.